© Provided by BusinessWorld
THE PHILIPPINES scored low in the Digital Quality of Life Index 2020 due to its expensive and low-quality internet. — REUTERS

© Provided by BusinessWorld
THE PHILIPPINES scored low in the Digital Quality of Life Index 2020 due to its expensive and low-quality internet. — REUTERS

LOWERING the value-added tax (VAT) imposed on internet services would be the fastest way to make it more affordable in the Philippines, an expert said. But policy makers are cool to such a proposal, saying it will not help improve the overall internet infrastructure and quality.

In its Digital Quality of Life Index 2020 released earlier this month, the research arm of information technology firm Surfshark Ltd. found the Philippines had one of the world’s worst internet affordability and quality, ranking 79th and 84th, respectively, out of 85 countries.

Surfshark’s Digital Quality of Life (DQL) Research Head Dom Dimas said the Philippines should address the factors that directly influence the affordability of the internet such as net wage (after tax), internet price, and the length of workweek.

“To improve affordability in the shorter run, the incentives should focus on softening the price burden to end consumers, for instance, by decreasing the VAT of telco services,” he said in an e-mailed reply to BusinessWorld’s questions.

Mr. Dimas said the Philippines should also focus on increasing the levels of competition that would force telcos to compete on prices and invest more on infrastructure to offer better services.

“Also, governmental agencies can influence affordability by incentivizing the telcos in terms of network development,” he said, noting this can be done by shortening the licensing process for operations.

“Usually, the length of the regulatory hearings for getting a license can discourage new entrants from proceeding. Besides, the process favors the big players to enter by requiring high speed and investment commitments.

The government can also sponsor infrastructure expansion to regions that are not financially profitable, Mr. Dimas added.

“Price is a symptom of the real problems: infrastructure and quality. If you do just the VAT reduction, soon enough, maybe a year after, you’ll be back to the higher price where you started,” Mr. Salceda said in a phone message.

He warned the lasting consequences of such a move would be “overwhelmingly negative.”

“We will lose revenue for digital infrastructure, which is the real inadequacy, while not addressing any of the real causes of bad and expensive internet in the Philippines. The prices will keep rising for lower quality until we tackle the real causes of expensive and unreliable internet in the country. You take out VAT now, but you don’t solve any of the causes, you’ll end up getting a temporary price reduction that you will lose soon enough,” Mr. Salceda said.

Instead, Mr. Salceda proposed the liberalization of the use of satellites for internet connectivity. He said the proposed Faster Internet Act would help further develop internet infrastructure and improve competition in the industry.

Information and Communications Technology Undersecretary Ramon P. Jacinto said lowering the VAT on internet services would not have a significant impact.

“The real solution is to lower the cost of the source of the bandwidth and cost of  delivery to the end user which can be achieved once the Facebook optic fiber, which the government is hosting and is crossing Luzon, is in operation and the connection to the National Grid, which is part of the National Broadband Plan, is in operation,” he said in a phone message.

Philippine information and communications industry (ICT) expert Eliseo M. Rio, Jr., a former DICT undersecretary, said in a phone interview there is no need to lower the VAT on internet services as telcos can actually invest in infrastructure development.

Mr. Rio said telcos and the government are already focusing on improving the infrastructure, especially after President Rodrigo R. Duterte threatened to expropriate the country’s two telecoms firms if they fail to improve their services by December.

“The December deadline will not be realistic or possible without government intervention in addressing the red tape involved in putting up telecommunication infrastructure. The government had moved in this direction when it recently announced that permits had been granted to put up more than 1,200 cell sites and these will be operational by December,” Mr. Rio said.

“Also approval of permits in laying out fiber optic cables have also been facilitated. This is a big step in improving the quality of service of our telcos. The problem is not the lack of incentives or investments to put up telecommunication infrastructure. For more than two decades, red tape that cost telcos billions of pesos had made our telecommunication services poor and expensive,” he added.

For his part, Senate President Pro Tempore Ralph G. Recto said in a phone message that cutting VAT on internet services would be doable even during the pandemic. “Yes, that’s a no-brainer,” he said.

According to Surfshark, mobile and broadband internet affordability in the Philippines has actually increased this year.

“Meaning that time to afford the cheapest mobile internet package of 1 gigabyte (GB) decreased from 34 minutes to 32 minutes and 24 seconds, which translates to almost a 5% decrease in the time of work needed,” Mr. Dimas explained.

The work time required to afford broadband services also decreased from 645 minutes to 439 minutes, meaning “around 32% decrease in the time of work needed to afford the cheapest broadband package,” he added.

Sun Aug 30 , 2020
SAN FRANCISCO (AP) — Schools across the United States are facing shortages and long delays, of up to several months, in getting this year’s most crucial back-to-school supplies: the laptops and other equipment needed for online learning, an Associated Press investigation has found. The world’s three biggest computer companies, Lenovo, […] 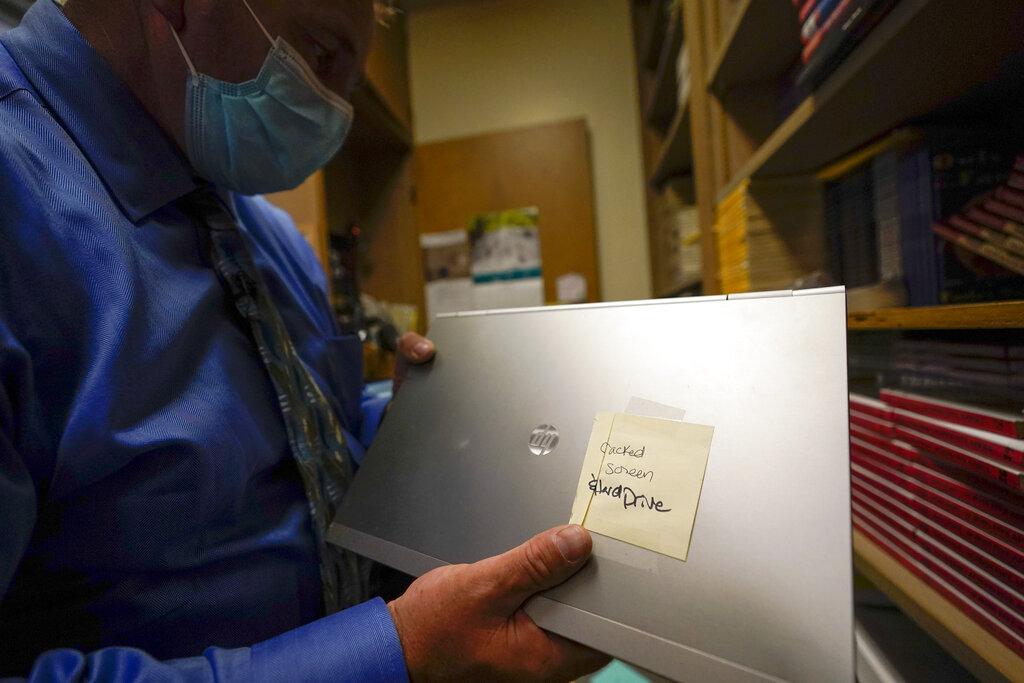