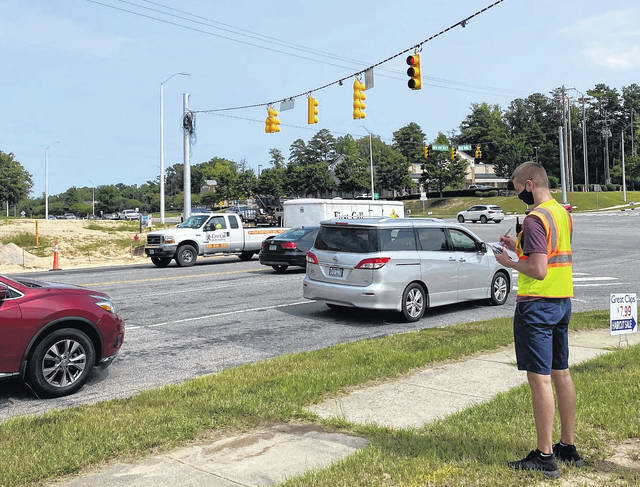 LUMBERTON — Surveys to determine the official rate of seat belt usage in North Carolina are currently underway in 15 counties, including Robeson.

The North Carolina Governor’s Highway Safety Program is partnering with researchers from N.C. State’s Institute for Transportation Research and Education, who will be conducting roadside surveys now through Oct. 3 at randomly selected sites. Robeson County is one of the 15 counties in the state with the most “unstable” seat belt usage rate that were included in the sample for the annual statewide seat belt use survey. Other counties in the top 15 are Mecklenburg, Pender, Sampson, Columbus, Alamance, Buncombe, Catawba, Cleveland, Durham, Forsyth, Guilford, Nash, Wake and Wilkes.

Results from the surveys are necessary to qualify for federal seat belt incentive grants. The federal money is used to fund initiatives that support the elimination of preventable roadway deaths across North Carolina.

During the survey, researchers will be observing belted and unbelted drivers and passengers at 120 randomly selected sites. Eight of those sites will be in Robeson County, said Daniel J. Findley, senior Research Associate, N.C. State’s Institute for Transportation Research and Education.

Trained observers are working in pairs, one observer per traffic direction on opposite sides of a controlled intersection, collecting observations on paper forms using a clipboard. Each site is randomly assigned a specific data collection time period during daylight hours and is observed for one hour.

“County-level rates are also calculated from this study, but the overall purpose is to calculate a state-level rate from a sample of observations that is representative of all drivers and right front seat passengers of all passenger vehicles that travel on all roads in the state during daylight hours in all days of the study year,” Findley said.

“While this three-year trend is still above the average of many states, a slight decline in numbers reflects thousands of individuals who are simply choosing not to protect themselves and others around them,” said Mark Ezzell, NCGHSP director.

According to the N.C. Department of Transportation, if a motorist is ejected from a vehicle in a crash, the odds are that they will not survive. In 2018, 84% of the people ejected from passenger vehicles in crashes that occurred in North Carolina were killed.

In Robeson County, the number of deaths involving motorists not wearing a seat belt during vehicle crashes has more than doubled from January to July 2020 when compared to the same period in 2019, according to NCDOT. In 2019, there were seven deaths reported as a result of not wearing a seat belt in a crash, and 15 reported during the first half of 2020. Two more deaths were reported in August, according to the NCDOT.

“As we approach the month of October, which is by far the deadliest month on our roadways, we need people to start buckling up again and ultimately reduce the injuries and deaths in motor vehicle crashes we are seeing,” Ezzell said.

The Saved by the Belt Program is one way Robeson County is addressing this issue. The free course allows people with seat belt violations to attend a two-hour class at Southeastern Health in order to get the first ticket waived.

About 300 people have participated in the class since its inception a year ago, said Phillip Richardson, SeHealth Community Health Services manager.

Classes were halted in March because of the COVID-19 pandemic. Classes resumed June 20 with safety measures put in place, including reducing class sizes to no more than eight participants, having only one instructor per class, temperature screens and health screening questions, mandatory wearing of a face mask, social distancing for seating, and sanitizing before and after class.

“The backlog of attendees has been addressed, and we are signing up new participants,” Richardson said. “The fiscal year 2021 grant has been tentatively approved, and we hope to continue our classes in October.”

Saturday will mark the program’s 22nd class. Upcoming classes are scheduled for Oct. 10 and Oct. 24. Go to www.srmc.org under “Calendar of Events” to register online.