A large number of American schools will not be able to provide laptops to students who are learning virtually this fall due to the COVID-19 pandemic partly because of the Trump administration’s sanctions on China over its treatment of Uighur Muslims, it was reported.

Schools across the United States are facing shortages and long delays, of up to several months, in getting this year’s most crucial back-to-school supplies: the laptops and other equipment needed for online learning, an Associated Press investigation has found.

The world’s three biggest computer companies, Lenovo, HP and Dell, have told school districts they have a shortage of nearly 5 million laptops, in some cases exacerbated by Trump administration sanctions on Chinese suppliers, according to interviews with over two dozen US schools, districts in 15 states, suppliers, computer companies and industry analysts.

As the school year begins virtually in many places because of the coronavirus, educators nationwide worry that computer shortfalls will compound the inequities – and the headaches for students, families and teachers. 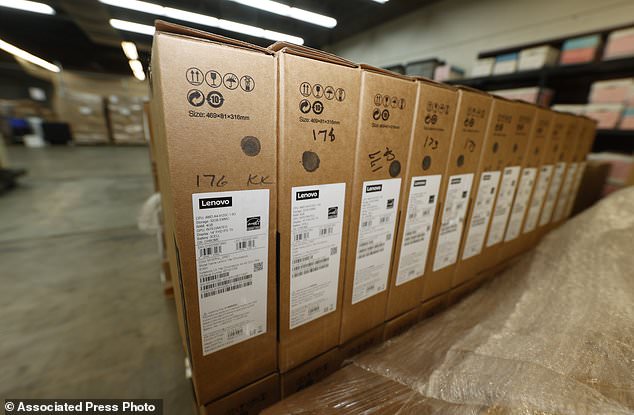 Four pallets of Lenovo Chromebook laptops sit in a Denver Public Schools warehouse after arriving on Friday. Schools across the United States are facing shortages and long delays in getting this year’s most crucial back-to-school accessories: the laptops and other equipment needed for online learning 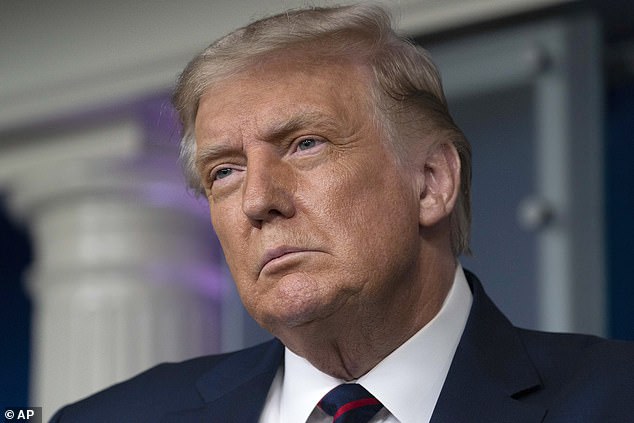 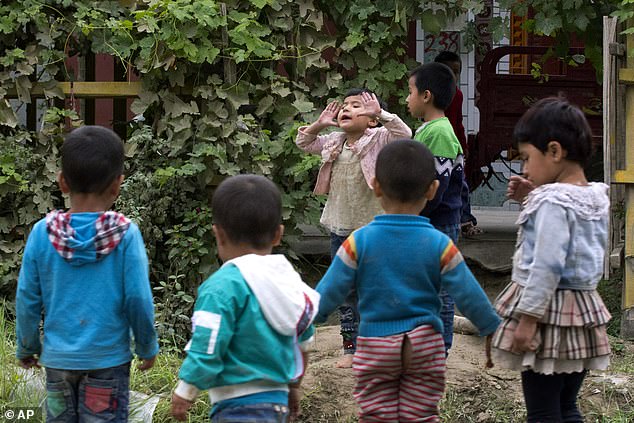 The US sanctioned Chinese companies it says were implicated in forced labor or other human rights abuses against the Uighurs, a Muslim minority population concentrated in the Xinjiang region in northwest China. Uighur children are seen above in Xinjiang in August 2018

‘This is going to be like asking an artist to paint a picture without paint. You can’t have a kid do distance learning without a computer,’ said Tom Baumgarten, superintendent of the Morongo Unified School District in California’s Mojave Desert, where all 8,000 students qualify for free lunch and most need computers for distance learning.

Baumgarten was set to order 5,000 Lenovo Chromebooks in July when his vendor called him off, saying Lenovos were getting ‘stopped by a government agency because of a component from China that’s not allowed here,’ he said.

He switched to HPs and was told they would arrive in time for the first day of school August 26.

The delivery date then changed to September, then October. The district has about 4,000 old laptops that can serve roughly half of students, but what about the rest, Baumgarten asks rhetorically.

‘I’m very concerned that I’m not going to be able to get everyone a computer.’

Chromebooks and other low-cost PCs are the computers of choice for most budget-strapped schools. 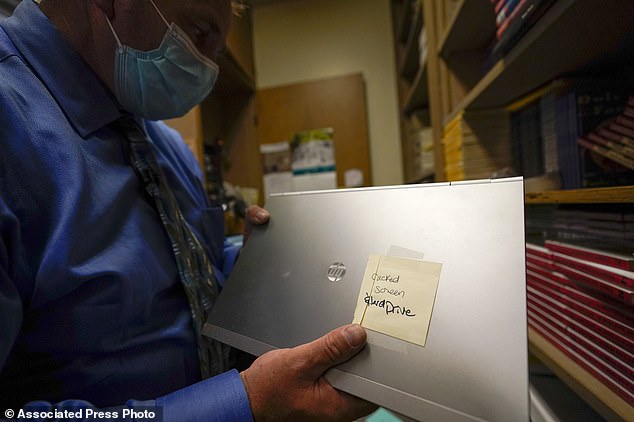 Tom Baumgarten, superintendent of the Morongo Unified School District, looks at a laptop with a cracked screen at Twentynine Palms Junior High School in Twentynine Palms, California, on Tuesday

The delays started in the spring and intensified because of high demand and disruptions of supply chains, the same reasons that toilet paper and other pandemic necessities flew off shelves a few months ago.

Then came the Trump administration’s July 20 announcement targeting Chinese companies it says were implicated in forced labor or other human rights abuses against a Muslim minority population, the Uighurs.

The Commerce Department imposed sanctions on 11 Chinese companies, including the manufacturer of multiple models of Lenovo laptops, which the company says will add several weeks to existing delays, according to a letter Lenovo sent to customers.

School districts are pleading with the Trump administration to resolve the issue, saying that distance learning without laptops will amount to no learning for some of the country´s most vulnerable students.

‘It’s a tough one because I’m not condoning child slave labor for computers, but can we not hurt more children in the process?’ said Matt Bartenhagen, IT director for Williston Public Schools in North Dakota, a district of 4,600 waiting on an order for 2,000 Lenovo Chromebooks.

‘They were supposed to be delivered in July. Then August. Then late August. The current shipping estimate is “hopefully” by the end of the year.’

The Denver Public Schools district, the largest in Colorado, is waiting for 12,500 Lenovo Chromebooks ordered in April and May.

The district has scrambled to find machines, settled for whatever is available and is handing out everything they get to students that need them.

Still, when school starts Wednesday, they will be about 3,000 devices short, says Lara Hussain, an IT director for the district.

‘We were promised devices. Our students need devices. And as a result of not receiving devices we will have students starting the school year unable to participate. It´s unconscionable,’ said Hussain. 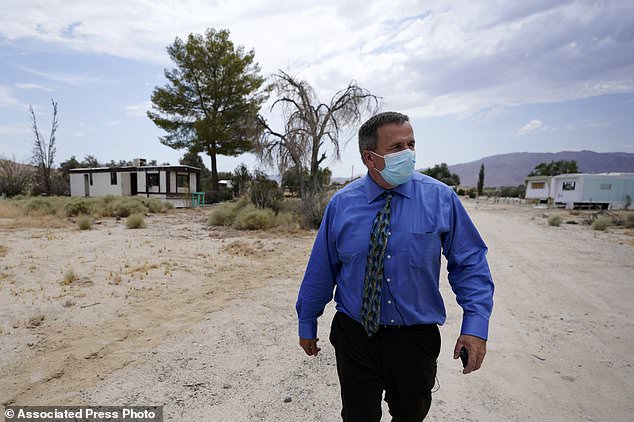 Baumgarten (pictured above on Tuesday) was set to order 5,000 Lenovo Chromebooks in July when his vendor called him off, saying Lenovos were getting ‘stopped by a government agency because of a component from China that’s not allowed here,’ he said

Lenovo had informed Denver and other districts over the spring and summer of supply chain delays.

In late July, Lenovo sent a letter to customers to say the ‘trade controls’ announced by the Commerce Department would cause another slowdown of at least several weeks.

‘This delay is a new development and is unrelated to supply constraints previously communicated,’ Matthew Zielinski, president of Lenovo North America said in the letter, which referred to the sanctions on a Chinese supplier, Hefei Bitland Information Technology Co. Ltd.

The letter listed 23 Lenovo models for education and corporate customers made by Bitland.

‘Effective immediately, we are no longer manufacturing these devices at Bitland,’ the letter said, adding that Lenovo is working on ‘a transition plan’ to shift production to other sites.

A Lenovo official told California´s Department of Education the company has a backlog of more than 3 million Chromebooks, said Daniel Thigpen, the department´s spokesman.

Lenovo declined to respond to repeated questions from AP seeking confirmation of the backlog and details on the numbers of devices delayed, replying only to deny a question on whether computers were seized by US customs, as some schools were told by suppliers.

US government agencies said they have no knowledge of the computers’ whereabouts and also deny any were seized. 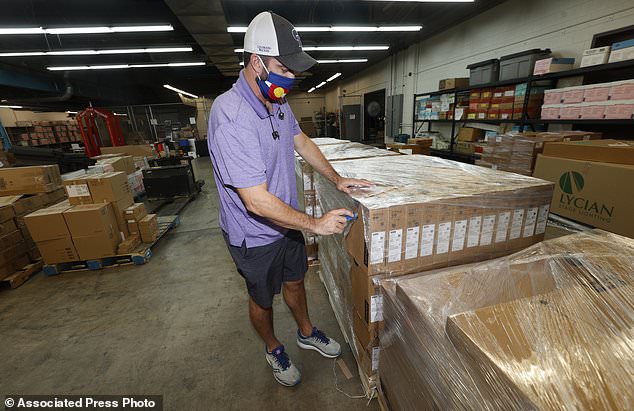 ‘US Customs and Border Protection does not have any record of detained laptops matching this description,’ the agency said in a statement.

The Department of Commerce said it added Hefei Bitland to its so-called Entity List, which restricts the export and in-country transfer of items by sanctioned companies.

‘It does not apply to the importation of Chromebooks from China,’ the department said in a statement, adding, however, ‘we should all agree that American school children should not be using computers from China that were produced from forced labor.’

There are no nationwide tallies on the numbers of laptops and other devices that schools are waiting for.

The Associated Press found that some of America´s biggest school districts are among those with outstanding orders of Chromebooks, other laptops or hotspots for internet connections, including Los Angeles, Clark County, Nevada, Wake County, North Carolina, Houston, Palm Beach and Hawaii, the nation´s only statewide school district.

A recent poll of California’s 1,100 districts showed schools across the state are waiting on at least 300,000 backordered computers, said Mary Nicely, a senior policy advisor to the state superintendent.

A survey in Alabama found that about 20 schools were waiting on 33,000 computers, said Ryan Hollingsworth, director of the School Superintendents of Alabama.

Some of the school districts, like Los Angeles, say the outstanding orders are for replacement devices and all students who need a computer will have one.

Many districts are asking parents with the means to buy devices for their children but realize that’s not an option for many families.

It’s also not an easy task with supplies at commercial stores running out. 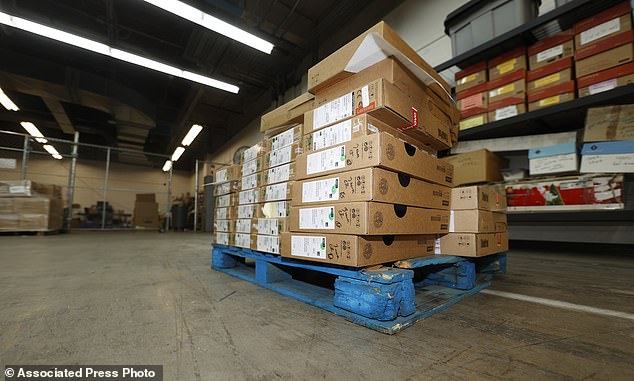 Best Buy’s website shows 36 models of new and used Chromebooks priced under $500, the low-cost models that are popular for students. As of this week, 33 of those models were sold out.

The backlog and delays have become so widespread that some students will be forced to start the semester without an essential piece of technology for remote learning, said Michael Flood, senior vice president of Kajeet, which works with more than 2,000 school districts in the US and Canada.

Some school administrators told Flood their laptop and Chromebook suppliers hope deliveries will only be delayed by a month or so. But others are being told their machines may not be available until early 2021.

The shortage stems from exceptionally high demand at a time when the personal computer industry is still recovering from pandemic-driven precautions that shut down the factories of major PC suppliers in China during February and March.

Just as the supply chain started ramping back up, new orders poured in from huge companies and government agencies with large numbers of employees working from home – in addition to school districts scrambling to secure machines, said Mikako Kitagawa, research director at Gartner Inc., which closely follows the PC industry.

‘The bottom line is everyone seems to want a laptop or Chromebook right now and there just isn’t enough supply of it,’ Kitagawa said.

To make matters worse, many school districts underestimated their needs during spring ordering, assuming that traditional in-person classes would resume in the fall. 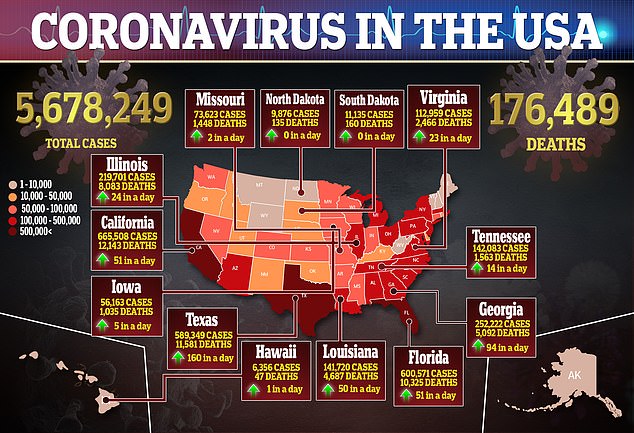 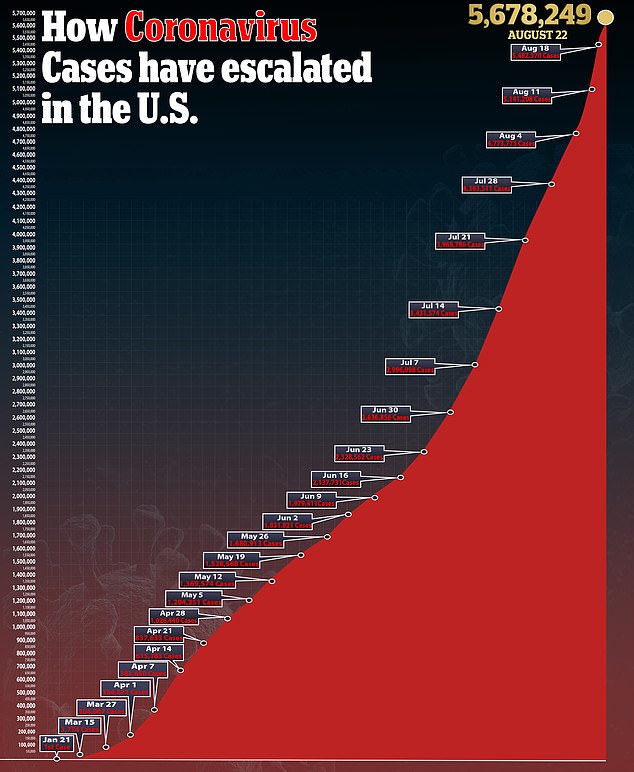 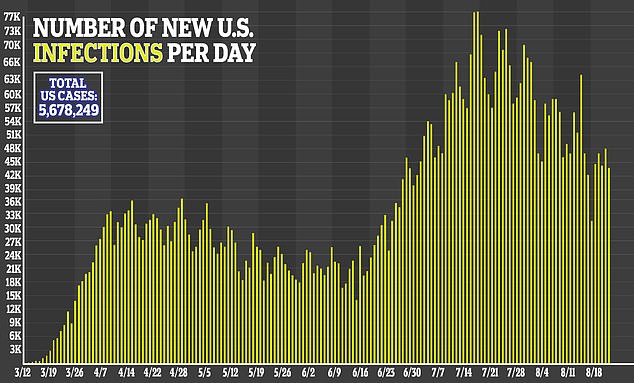 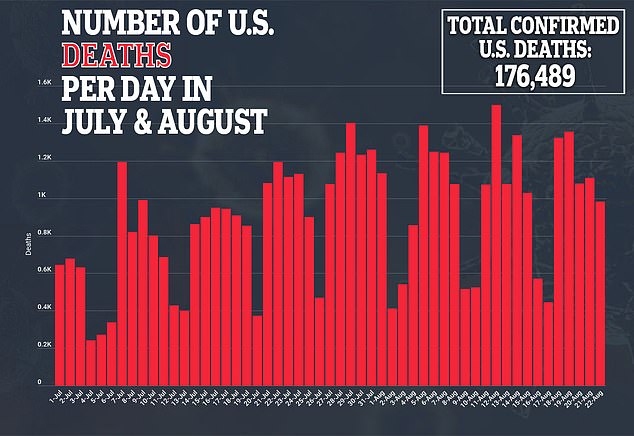 In California, most schools were planning for some form of in-person classes in the fall but only learned in July that wouldn’t be possible, when Governor Gavin Newsom effectively ordered the majority of schools to start with remote learning.

It created a mad dash for computers.

Tom Quiambao, director of technology for the Tracy Unified School District in Northern California, said he and his vendor contacted HP directly to ask why his July order for 10,000 HP laptops would take three months to be delivered.

He was told, ‘HP is short 1.7 million units of laptops’ because of production shortages in a variety of components made in China, including processors, touchscreens, motherboards and others, Quiambao said.

An HP spokeswoman declined to confirm or deny that number, saying only ‘we are continuing to leverage our global supply chain to meet the changing needs of our customer.’

Dell offered a similarly brief response to detailed questions about a backlog.

‘We can’t comment on demand and supply specifically,’ Dell said in an emailed statement, adding the company was seeing increased orders due to virtual learning and trying ‘to fulfill orders as efficiently as possible.’

With so many customers ordering laptops at the same time, PC manufacturers may be put in the uncomfortable position of deciding who gets them first, said Linn Huang, an analyst for the research firm International Data Corp.

Those kind of pecking orders threaten to push small school districts to the back of the laptop line.

That’s part of the problem for the central Texas district of Abilene, where they are waiting for 6,000 Dell Chromebooks, ordered in May and June but not expected until November.

‘In Texas, there are over 1,200 school districts and they’re all ordering,’ said district spokesman Lance Fleming.

Schools are trying to get disinfecting supplies, too.

‘Who would have ever thought that computers and Clorox Wipes would be on the same level of need in our country.’